Enjoy the next few days N.J., because winter is coming with a vengeance

Home   /   Uncategorized   /   Enjoy the next few days N.J., because winter is coming with a vengeance

Looks like we are in for a cold winter season after such a warm December. Call MTP Services& Heating LLC to make sure your heating system is ready for action!!! 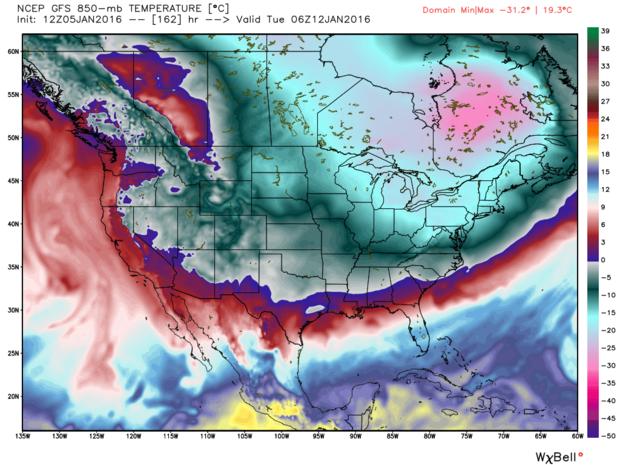 A map from the Global Forecast System (GFS) shows cold air spilling into the east next week. (Weather Bell)

After a relatively benign and historically warm start to winter in the Garden State, forecast data shows that things are likely to take a turn for the dramatic in January and February, with storms, snow and shots of bitter cold all potentially in the offing.

The general stability of the weather pattern that has been in place since early December looks poised to be disrupted, putting North America’s most dominant atmospheric phenomena — the Polar Vortex and El Niño — on a more explosive collision course.

“We’re definitely entering a very active weather pattern, a very volatile weather pattern,” said Steven DiMartino, owner of NY NJ PA Weather in Freehold. “This will be the type of situation where things will catch you by surprise if you’re not paying attention.”

It starts with an Arctic incursion

While temperatures dropped to the single digits overnight Monday and Tuesday, a more significant blast of cold air is likely to follow next week, forecasters say.

Temperatures are expected to moderate, climbing back to the mid 40s across New Jersey for much of the week. But as they do, to our north, the Polar Vortex, a large, semi-permanent area of low pressure that generally sits atop the Arctic Ocean and Siberia, will be starting to break apart.

Temperatures could end up well below normal for a period of seven to 10 days, according to AccuWeather.

“Cold air is more dense, so it’s a little harder to get out of the picture,” said Paul Pastelok, a senior meteorologist at AccuWeather. “And I think this air mass is going to be pretty darn cold.”

The cold air should actually limit New Jersey’s chances for a significant winter storm, however, as deeply cold air is typically very dry, starving would-be storms of the necessary energy they thrive on.

That’s not to say New Jersey won’t see snow this winter — quite the opposite. But it will take a stronger role from El Niño, which as it turns out could be a blessing and a curse for New Jersey, for that to happen.

Test yourself: Do you know how cold it has to be for these 11 things to freeze Can you guess the freezing temperatures of water, milk, cola, vinegar, beer, oil, liquor, salt water, jet-fuel, antifreeze and ethanol? (Video by NJ Advance Media Staff)

In one sense, El Niño could actually be New Jersey’s savior.

Next week’s predicted cold outbreak is strikingly similar to situations we saw in 2014 and 2015 — two of the coldest winters on record. Those Arctic air masses hung around for weeks at a time, turning New Jersey into a teeth-chattering tundra.

But El Niño, which is characterized by the warming of ocean waters in the eastern Pacific Ocean, is a variable that didn’t exist. El Niño affects weather patterns around the world, super-charging the atmosphere in the Eastern Pacific with energy, which has a ripple effect across the globe.

In the coming weeks, it is expected to be the main driver behind a much needed, if dangerous, conveyor belt of storms expected to inundate drought-stricken California. That persistent pattern is expected to help dislodge any Arctic air mass that tries to anchor in the east, likely helping us avoid the weeks long periods of cold the East has seen in recent years.

“If El Niño wasn’t as strong as it is now, this would lock in,” Pastelok said. “But there’s just too much energy coming into the Pacific.”

But for every action, there is a reaction. And for New Jersey, that could come in the form of disruptive winter storms.

Forecasters expect an atmospheric tug-of-war between Arctic cold and El Niño’s influences to continue for the remainder of winter.

While Arctic air masses are typically dry, the potential for winter storms increases significantly when a warmer airmass tries to force a cold one out. Here, just enough cold air may remain to produce snow just as warmer, moist air tries to move in.

It’s a recipe that has produced some of the largest winter storms in state history.

Specificity with snow forecasts is virtually impossible beyond a week out, but the point that Pastelok is underscoring is that the ingredients for significant storms are increasingly likely to be in place in late-January and February.

“You’re not going to see prolonged Arctic blasts, but we’re going to see a lot of small shots of cold for a few days. It’s when we’re moderating that we’ll see the storminess,” he said. “Some of the storms will miss for snow and some of them won’t, but we’re entering a very active period.”